Rare species thrive in the National Trust for Scotland‘s Inverewe Garden as the effects of the Gulf Stream meet the Highlands.

Inverewe Garden enjoys a glorious location in the North West Highlands on the coastal shores of Loch Ewe, a designated Marine Protected Area. Don’t miss the regular wildlife boats trips from Inverewe Garden jetty – the loch holds a rich diversity of sea life and a healthy coral reef which supports a wealth of plants and animals. Your chance to look out for sea eagles, seals, creels with lobsters and crabs, otters– all of these are seen regularly by Captain Jamie on his daily boat trips.

Visit Inverewe House in the grounds of the 54 acre heritage garden, and see the special 2020 year long evolving exhibition in the Summer House celebrating the Year of Coasts and Waters.  Find out more about the biodiversity of Inverewe Garden and the waters, and what lies beneath them, including an aquarium to show underwater life of Loch Ewe. Our springtime festival focuses on the superb national collections of rhododendron and also the world famous woodland collection of erythronium – keep an eye open for the recently introduced red squirrels! Families can explore the Global Trail which takes you around the world in one visit – and the chance to learn about this garden which was created from a barren wilderness in the 19th century. The fascinating newly refurbished Inverewe House is a ‘must’ where you can even take away your own little memory of your visit with seeds to grow your own Inverewe flowers when you get home!

Inverewe celebrates the best of human achievements in the natural environment. Marvel at our heritage garden, containing species from across the globe and created from a barren wilderness in the 19th century. A labour of love and enduring commitment, it’s a feast for your senses. Rare species thrive in this heritage garden as the effects of the Gulf Stream meet the Highlands. Discover the story of a father and daughter who created a garden amid a barren wilderness on the Atlantic coast in the North West Highlands. Explore the garden of experimentation and wonder at the calendar of colour and scents, cultivated with care … and a hefty dose of creativity. Look out for Inverewe’s huge California redwoods that tower into the sky – you can’t miss them! Spot Scotland’s Big 5 in wildlife: red squirrel, red deer, otter, seal and golden eagle. You may even see a big 6th – the sea eagle! 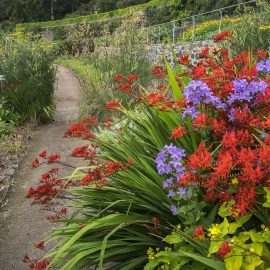 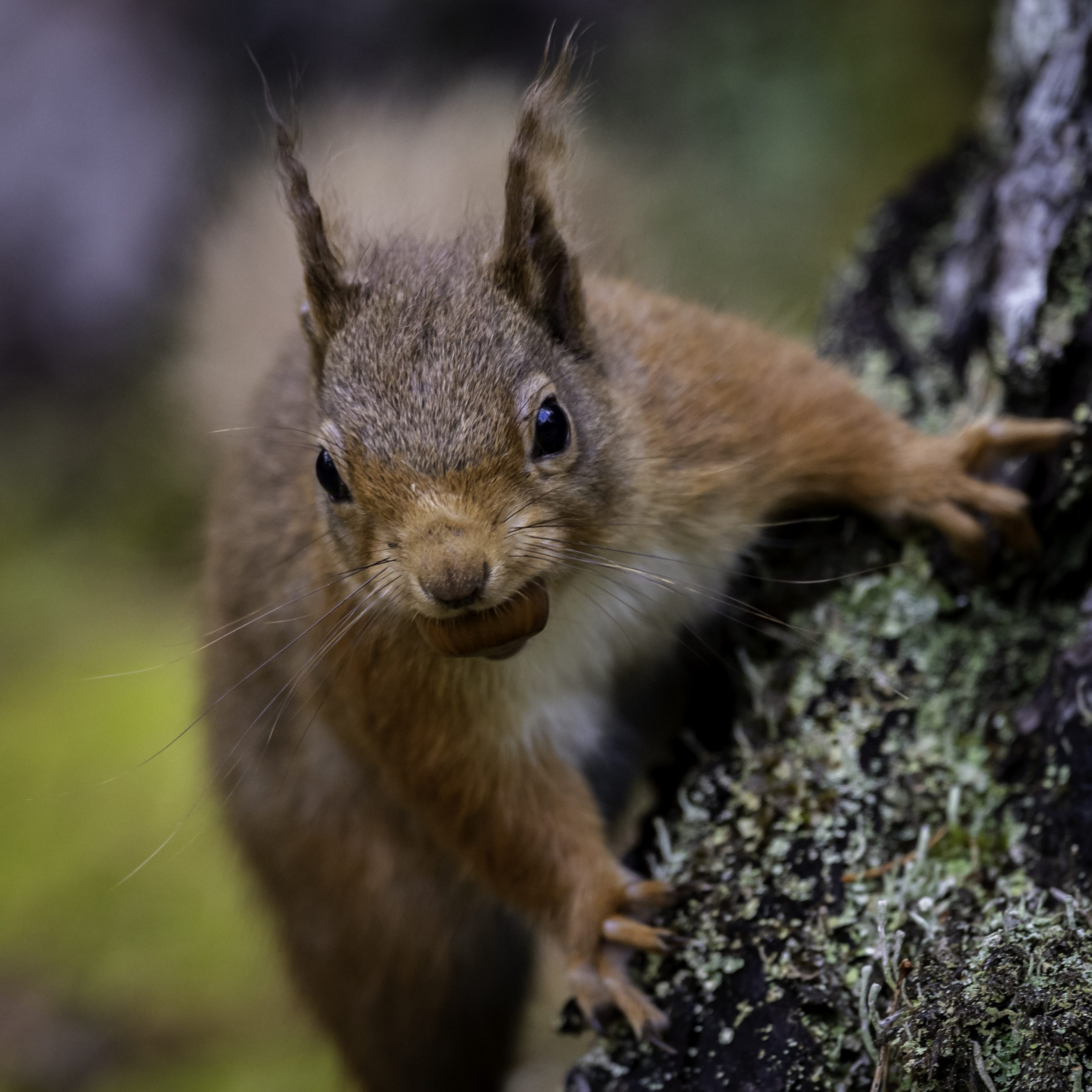 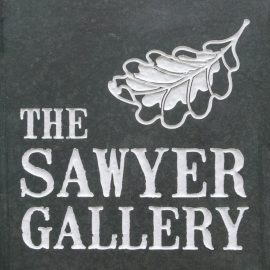 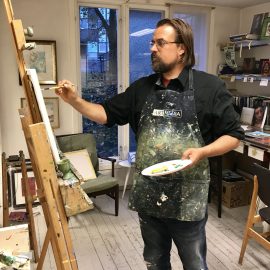 This is a setting that inspires art and creativity. At its heart is a museum with a twist, where you’re encouraged to interact with a variety of objects and play games. The adjacent Sawyer Gallery hosts exhibitions by the artists in residence throughout the year that reflect the characteristics of the garden and surrounding environment.

Inverewe also has a wide range of events over the season including a Spring Festival, celebrating the national collections of rhododendron and oleria and the famous display of those woodland glories, the erythroniums. The autumn sees the amazing Inverewe Illuminations showcasing the garden in a very different light.

Discover the glories of Inverewe Garden throughout the year

It’s astonishing what you can grow in one of the most northerly corners of Scotland when you put your mind to it! Meandering through the garden on this remote stretch of coastline is a paradise of unusual and wonderful plants, where the unexpected greets you at every corner.

Ivy-like flowers of Pseudopanax on the entry to Bambooselem, snowdrops and snowflakes beneath the trees, tree ferns and palms perhaps dusted with snow.

Camellias on the Drive, forced rhubarb in the Walled Garden, hellebores and narcissi in the woodland borders.

Rhododendron barbatum and R. strigillosum, with their blood-red flowers on Niveum Walk, and the hand-sized blooms of Magnolia campbelii in Bambooselem adding to the spring flowering displays.

Flowering cherries at the entrance, rhododendrons and highly-scented azaleas, carpets of Erythronium, both yellow and pink, and bluebells in the woodland glades. 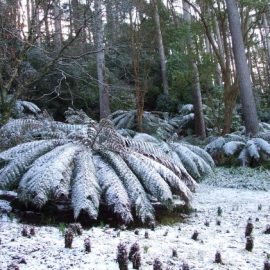 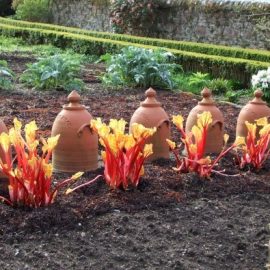 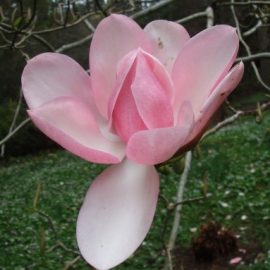 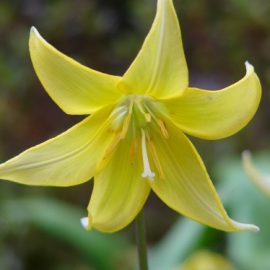 Trillium near the High View Point, Lysichiton (American skunk cabbage) and Gunnera manicata (giant ‘rhubarb’) at the ponds, the white bracts of the ‘handkerchief tree’ in Bambooselem with rhododendrons of every colour everywhere.

Mudan peonies to start the month and roses to end it in the Walled Garden, tender ornamentals including the diverse collection of sculptural aeoniums now the length of the Drive, the Chilean lantern tree and the New Zealand daisy bush at their best …

Sunflowers, such as cheerful ‘Little Dorrit’ in the Walled Garden, water lilies in the Big Pond, the orangy Chilean climber, Mitratria coccinea, clinging to rock faces and shady banks, and the gold-tipped, scarlet bursts of the New Zealand “Christmas Tree” (Metrosideros umbellata) along the Drive.

The Walled Garden is full of colour, including blue agapanthus, lilies white, orange and pink, the blaze of fiery crocosmia, including ‘Lucifer’, whereas in the woodland, it is the myriad white anemone-like blooms of Eucryphia that lighten the green shady corners. 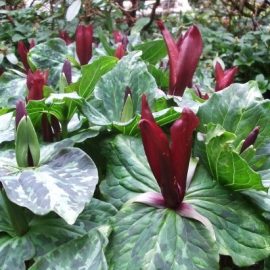 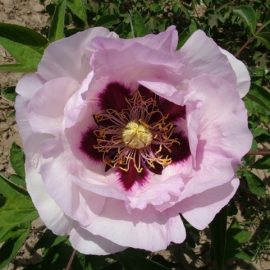 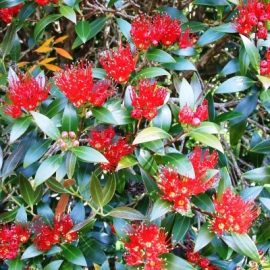 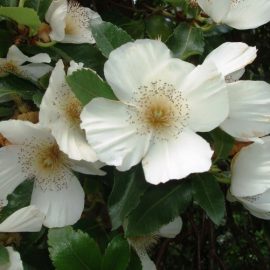 Dahlias of many shapes and colours in the Walled Garden, Eucomis (pineapple lily) and salvias on the Drive, bluey-mauve hydrangeas in ‘America’ and Fly agaric mushrooms, bright red in the leaf litter.

Brassicas and nerine in the Walled Garden, Autumn crocus on the Drive, Darmera peltata (Californian umbrella plant) along Rhododendron Walk and the autumn leaf colour of acers and birches through the woodlands.

Chusan palm in ‘Japan’, the blue-berried Billardiara longiflora climbing the trunks in Bambooselem, and the evergreen shrubs with interesting leaves such as Pseudowintera, Pittosporum tenuifolium ‘Tom Thumb’ and ‘Irene Paterson’. 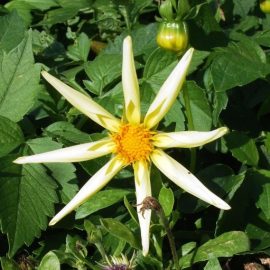 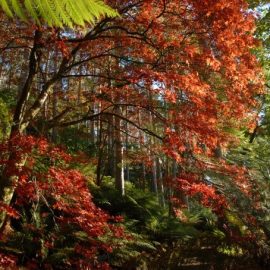 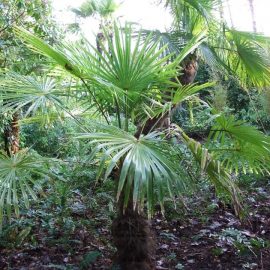 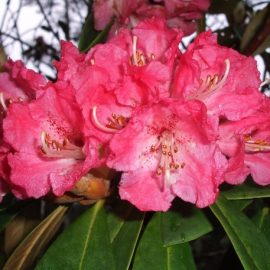