7 Movies Filmed along the North Coast 500

The Scottish landscape and scenery has provided a source of inspiration to artists, photographers and novelists for hundreds of years. But in more recent years, Scotland has been the star of the silver screen. The dramatic skies, rugged mountains and perfectly still lochs of the Scottish Highlands have been a particularly favoured backdrop of film directors, both here in the UK and further afield.

We’re sure you’ll be aware of some of the most iconic movie locations in Scotland already; Harry Potter and Ron Weasley flying the stolen Ford Anglia underneath the Glenfinnan Viaduct in Lochaber; Daniel Craig’s James Bond surveying the landscape at Glen Etive in Skyfall, and of course Pennan, which portrayed the fictional village of Ferness in Local Hero. But did you know that the following movie locations can all be found within the North Highlands?

Set amongst the stunning scenery of Wester Ross, this delightful film follows the story of a dysfunctional family as they head to Grandad’s 75th birthday at his estate in rural Scotland. With the parents having secretly separated, the kids soon become a liability, innocently revealing the intimate ins and outs of family life to their surrounding relatives. The day out at the beach and the film’s final scenes were filmed at the beautiful Red Point Beach near Gairloch in Wester Ross. A poignant film which features five bittersweet vignettes about five men from various eras of history, all called Hector and all played by the same actor, who find themselves at a critical juncture in their lives. The beaches around Scourie in the North-West Highlands, about halfway between Ullapool and Durness, were the backdrops for the prehistoric scenes in the film. 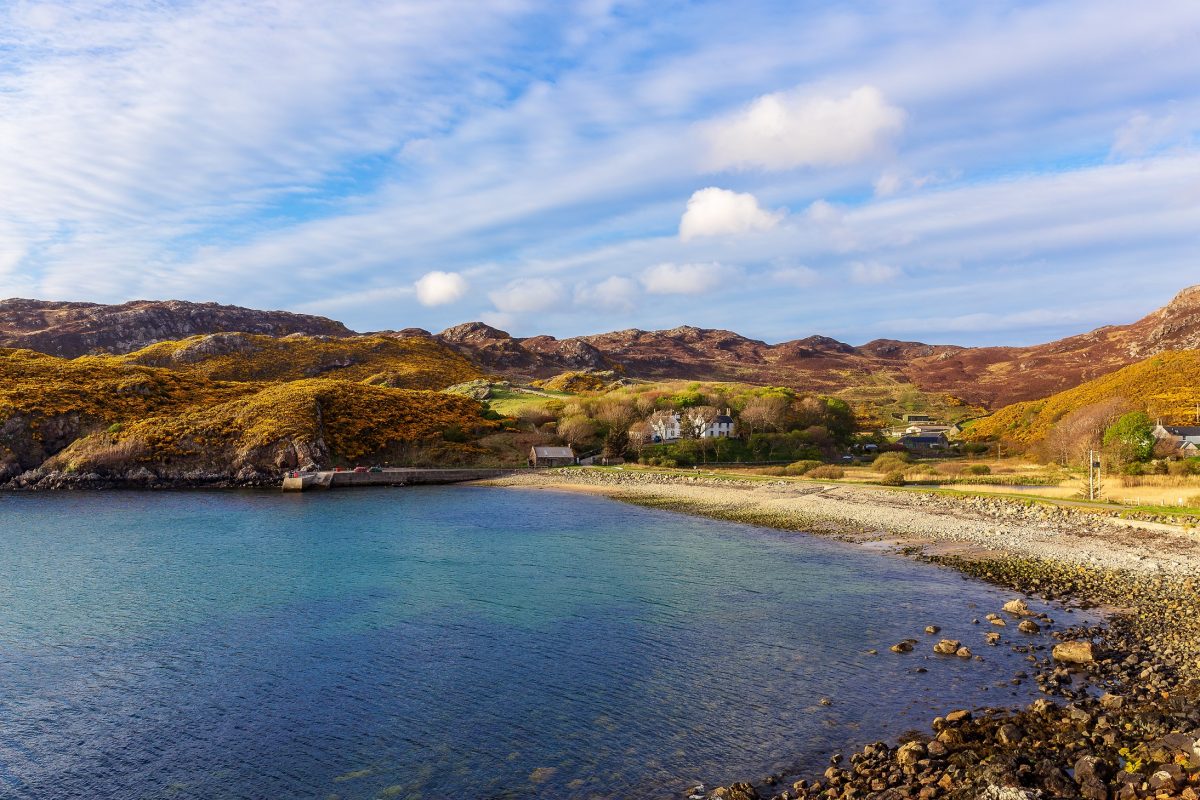 The landscape of the village Scourie in the Scottish Highlands. Image by rphfoto/Adobe Stock

Twenty years after the mysterious disappearance of the entire Ninth Legion in the mountains of Scotland, a young Roman Centurion sets out across Hadrian’s Wall into the unknown highlands of Caledonia to retrieve the lost legion’s golden emblem, the Eagle of the Ninth. The Pictish village of the Seal People was constructed just a few miles north of Achiltibuie on the West Coast and many locals appeared as extras in the film with roles such as “Seal Warriors”, “Seal Princesses” and “Elders”.

Nearby Achnahaird Bay was also the scene of a horse chase. Image by Dave Matt/Adobe Stock

The fourth instalment of the popular Harry Potter series sees Harry compete in the Triwazard Tournament, undertaking three tasks designed to test the wizard’s magical ability. 10 days were spent filming at Black Rock Gorge, just a short woodland walk from the village of Evanton, which was the setting for Harry’s fight with the dragon. Local folklore tells tales of a noblewoman who was lured into the depths of the narrow 120ft canyon, and her cries can still be heard from the top. A young man sets off on magical adventure to bring a fallen star back to his beloved to win her hand in marriage. To his surprise, the star is not actually a lump of rock, but rather a celestial being whom he must protect at all costs. Soon they are running into flying pirates, warring princes and wicked witches. Lochs Maree and Coulin near Kinlochewe were used as scenic backdrops, whilst the port for Captain Shakespeare’s flying ship was on top of the cliffs overlooking the Bealach Na Ba.

The spectacular Bealach na Ba on the Applecross Peninsula. Image by Iain Sarjeant

A group of mountaineers who are hiking in the Scottish Highlands discover a girl held captive in the wilderness. They are soon caught up in a frightening pursuit as they try to get the girl to safety. The scene where Alison leaps in to the stream to rescue the girl was filmed at Corrieshalloch Gorge near Auchindrean. The town of Dingwall, about 30 miles east of the gorge, was used as the site of the fire festival The River Droma forges through the gorge, dramatically dropping 100 metres in just 1.25km through a series of waterfalls. Image by Stephen Gourlay

Edie stars Sheila Hancock as Edith Moore, an elderly woman, who in the aftermath of the death of her controlling husband, decides to fulfil a life-long dream and overcome a lifetime of bitterness and resentment. At the tender age of eighty-three, Edie sets out to try and capture a little of the magic she had as a young girl by climbing Suilven. Against her daughter’s wishes, she heads to Scotland and employs Jonny (Kevin Guthrie – Dunkirk, Whisky Galore!) to help her prepare for the gruelling climb ahead – which sparks an unusual friendship.