As part of Karen Newman’s series on cycling the NC500 – Karen has provided a suggested alternative for cyclists doing the North Coast 500 to and from Inverness.

Inverness to Contin via the Kessock Bridge and National Cycle Route 1. 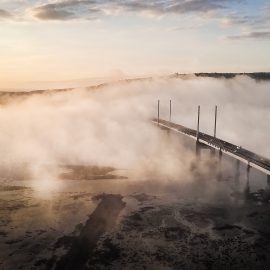 This alternative follows part of the Sustrans National Cycle Route 1 as described on their website: https://www.sustrans.org.uk/ncn/map

Part of it follows the tarmac cycle path alongside the main A9 to Torre where it is best to leave National Cycle Route 1 and take the A832 road to Muir of Ord,

• In Muir of Ord, go straight over the railway bridge,
• Then turn immediate left and continue on the A832 to Maryburgh.
• In Maryburgh, follow the road sharp right,
• Cross the narrow river bridge,
• At the T-junction, turn left onto the main A835 to Contin, about 2 miles.

The Kessock Bridge crossing is described in more detail by a local organisation, Transition Black Isle: http://www.transitionblackisle.org/userfiles/file/million%20miles/community_cycle_links/150305-ccl-route-11.pdf
To get to the start of their directions you may need a little help to avoid the busiest roads so the map below may be of use. The red marker shows where the Black Isle directions start. Some of this section may now be signed with the blue National Cycle Route 1 signs 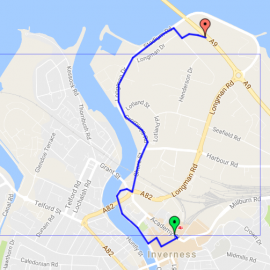 Featured North Coast 500 and Coronavirus – Travel Advice from July 2020 The UK and Scottish Governments’ current advice is to stay at home Read More
Spotlight on Wilderness Scotland Find out more about Wilderness Scotland who offer a range of guided, self-guided Read More Enjoying family time – and pies – on the North Coast 500 A cyclist's journey around the NC500! Read More Bike Shops and Cycle Repairs on the NC500 Route As part of Karen Newman’s series on cycling the NC500 – Karen has provided a Read More Cycling the north/east coast.. Avoid the heavy traffic Read More